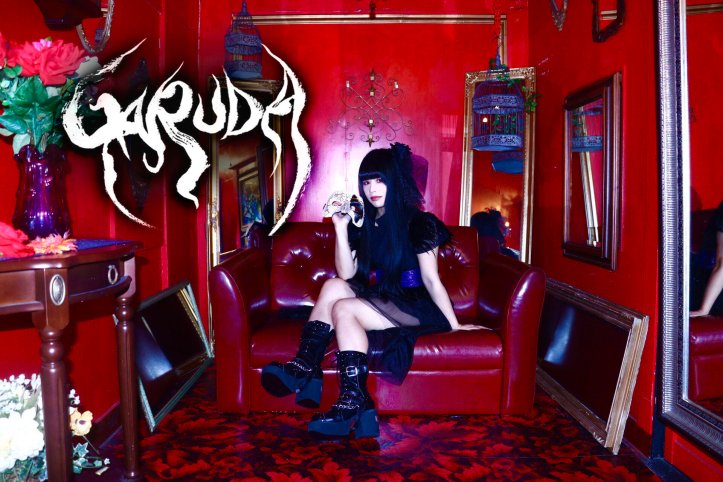 GARUDA is a solo idol project by Sakimura Yuffie [崎村ゆふぃ], who also is a member of the idol group Melon Batake A Go Go. GARUDA’s live debut was in June 2017 and at the time of writing has released a debut single (with 3 supporting tracks). It is an independent project, although Mr.Perkele (guitarist of the Necroband for NECRONOMIDOL) writes the instrumentals for the lyrics. GARUDA will be making her UK live debut as part of the Indie, Idol and Infamous Tour – April 2019!

GARUDA takes inspiration from Western industrial metal artists such as Linkin Park, Rammstein, Slipknot, etc. (some of which she has covered at her live shows). For those of you unfamiliar with style, it features rhythm beats that sound like hitting barrels, iron bars, etc., with a dulled guitar tone to emphasise the vocal. In GARUDA’s case, it takes a spin where it has an electronic element to it to produce these beats and manages to really capture the effect this way. The rhythm is intense, with some good breakdowns and manages to really support the vocals.

The vocals have a more refined and strong presence, singing in a deep and firm tone, Sakimura really makes her presence known. There is a great talent here, as it doesn’t even feel like she is battling the instrumental, where it does tend to slow down a bit during her vocal, it dominates so you can really tune into it. Where it doesn’t happen on this track, there is also some screaming vocals she has done for other tracks, completing the metal sound. GARUDA’s live videos really demonstrate the power behind the vocals, which is something spectacular to witness in person.

At present there is only one single, which presently cannot be imported by her official store.  However, there will most likely be copies available during the UK tour.