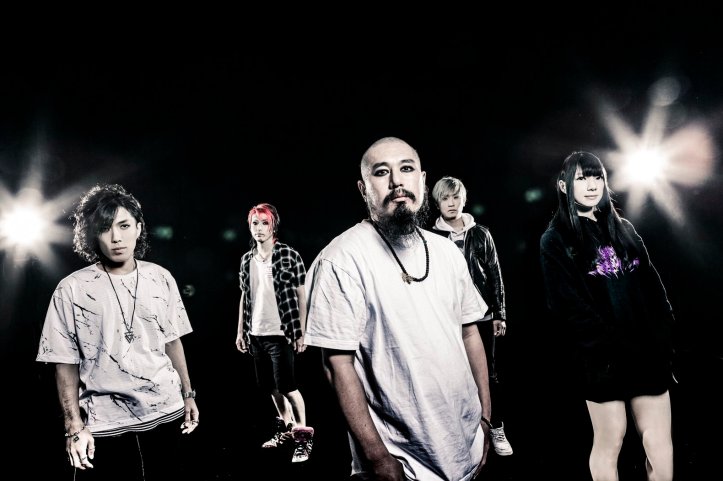 Forming all the way back in 1999 (originally as VISIONQUEST), Blood Stain Child originate from Osaka. Since then there has been a lot of line-up changes and currently the band consists of: Sadew (Vocal), Ryu (Lead Guitar), G.S.R (Guitar), Yakky (Bass), and YASU (Drums). Currently signed to FABTONE records in Japan, the band have released 5 albums, 3 EPS, and a best of album. They will also be releasing their 6th album in July. Unfortunately they had to cancel their planned UK show last time around but they will also be playing at the upcoming Metal Matsuri!

Blood Stain Child meld together electronic trance music with metalcore. The electronic side is brought alive through synths, which maintain a constant presence throughout each track. Where at points it will be the focus, in the intro or bridge, a lot of the time it is there to build up the rhythm and melodies, supporting at the higher pitch. The metalcore style then appears strongly from the rest of the instrumentation. What is interesting though, where it sounds intensely fast from the drums, and vocals. Both the bass and guitar actually feel a bit slower, focusing more on a strong rhythmic impact. Sure the shredding is fast pace, but this slower pace actually works really well with the trance style of the electronic elements. The vocals are a mix of screaming and clean vocals, which tracks bounce between seamlessly. It’s not even a case of screaming for verses and clean for the catchy chorus, which ever one makes more sense is the one that appears which creates an awesome sound.

As you have seen, the band has been together for a long time, and with quite a few member changes, which has influenced each album differently, removing a consistency in their discography. Although the stuff discussed in the first paragraph are the core features that remain. It does help to spice up their sound, as each album can be a bit too consistent. Still the vocals tend to be the main change as some albums have female vocals, others deliver a more screaming vocal focus with harsher metal sound overall. This works a lot more when listening to the whole discography together to keep your attention more, as each album does get a bit samey. Hopefully when they play Metal Matsuri they will draw upon a range of albums to deliver an incredible set!

Their latest album and EP are available digitally in the UK, with more albums available for streaming on Spotify. There maybe some physical copies out there from a previous european record label deal, but these seem to be out of print. Physical copies have to be imported, and hopefully some will be available at Metal Matsuri.