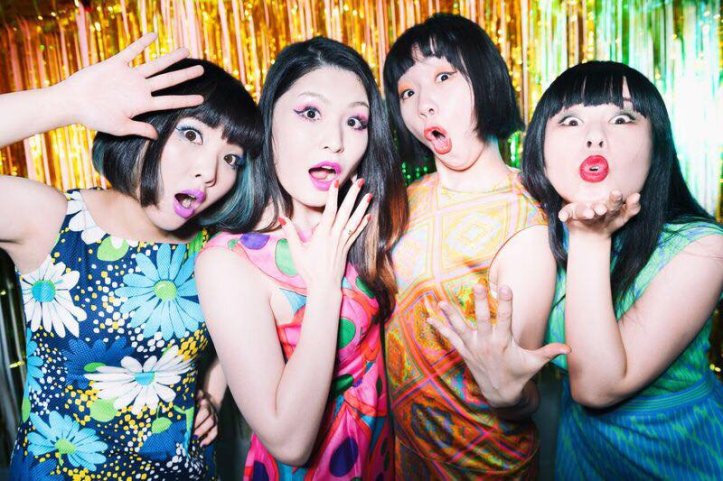 Otoboke Beaver originate from Kyoto, naming themselves after a local love hotel. Formed in 2009, working hard and saw it pay off in 2017 where they made a breakthrough. The band consists of:あっこりんりん (Accorinrin) [Vocals and Guitar),よよよしえ (Yoyoyoshie) [Guitar and Chorus), ひろちゃん (Hiro-chan) [Bass and Chorus), and かほキッス (Kahokiss) [Drums and Chorus). Signed to indie label Jet Set Records in Japan, and Damnably for UK (and the rest of the world), the band has released 1 album (which they remastered), 2 EPs, and 3 singles (one being a split). They have performed in the UK a few times, and have an upcoming tour during Golden Week (29th April to 4th May), which you can find out more about here. They are also releasing a greatest hits album to tie in with this tour!

Garage Punk Rock at it’s finest! The rhythm is loud and fast, sweeping you away as soon as you press play. Otoboke Beaver are not a band you can ignore. Each song varies from fast to extremely fast, leading to some intense guitar riffs. Not by just the standard guitars but also the bass gets in on the action as well, having a lead role for some of the tracks. The drums effortlessly keep the instrumental on pace. The heavy hits acting not just as the backbone but the element that keeps it all together. Where, to an extent, their sound is simple, that is what is so great about it. There is a fun element to it all and that is their greatest strength.

This is enhanced by the vocals which are lead by Accorinrin, yet everyone chips in. This provides variation that creates a bouncy energy to the tracks. Matching the instrumental in their intensity, borderline screaming, being clear to hear despite how loud the instrumental is. On some tracks in particular, the emotional feel from the vocals transcends the language barrier, making the songs easy to understand. I say that, but again, that fun element is at the forefront. It’s clear they’ve just made whatever music they want and sounds good. The recordings even feel like they have just been recorded as a one shot live performance, which is awesome.

From what I’ve heard, they put on one hell of a show and if their recorded stuff is anything to go by, seeing Otoboke Beaver is a good night is guaranteed.

Their discography is available digitally from their bandcamp, with some physical options available as well.