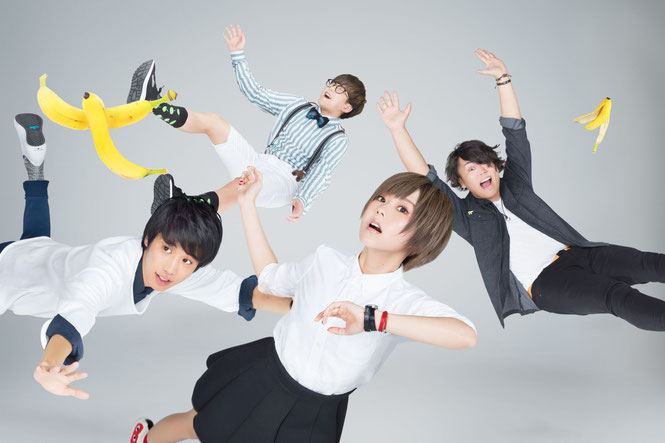 Polkadot Stingray (ポルカドットスティングレイ), formed in 2015, are a supernatural high-school rock band who have grand plans. The band is from the Fukuoka prefecture and comprises of ; 雫 (Shizuku) [Vocal and Guitar], エジマハルシ (Ejima Harushi) [Guitar],ウエムラユウキ (Uemura Yuuki) [Bass], and ミツヤスカズマ (Mitsuyasu Kazuma) [Drums]. Currently signed to Universal Records, the band have released 1 album and 2 mini albums. Unfortunately they have not performed in the UK but we hope their grand plans involve performing around the world!

Polkadot Stingray offer a real fun bouncy rock sound, which has a ranging appeal. I would say it’s limiting to just describe it as pop rock as it’s much more than that. There’s definitely a jazz influence on the instrumental, particularly in the swing of the rhythm of some tracks. It’s much more noticeable in the more upbeat tracks, the bouncy nature gives a real drive for the song. In the slower songs, the rhythm has a more stable flow and pieces everything together quite nicely. Shuzuku’s vocals follow this tone, it’s interesting as where they always flow, unlike over artists this doesn’t feel like it is on top of the instrumental, it comes together more and feels at the centre to it. They have a more J-pop feel than typical rock, but it works more with the instrumental sound.

The guitars are probably the most diverse across tracks I have heard from any artist. There is a mixture of fast chord riffs, guitar shredding, and even slower melodic strumming. For me the guitars are the real highlight of the sound, as there is a real talent in the writing of these tracks. It’s also nice that there is only a slight bit of gain, but overall they have gone for the more higher pitched sound so it isn’t overly distorted and works with the vocals, not overpowering the tracks. I really hope I can see them live one day just to hear this amazing guitar playing live as it would provide a real awesome energy in the room.

Their music is available digitally but the usual story of physical copies having to be imported applies.